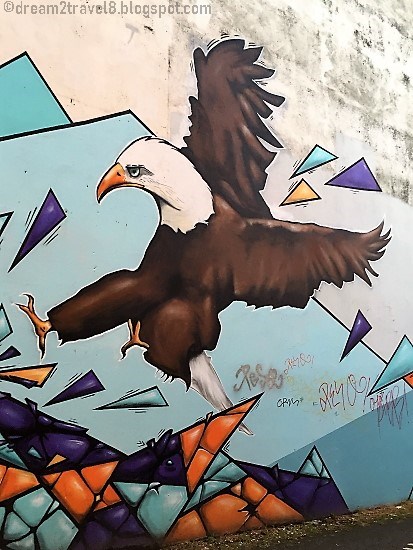 All the various photos of the stunning Northern Lights appearing in the various social media has brought back fond memories of our trip to Iceland! It was yet another impromptu week-long trip to Iceland in the hope of fulfilling our dreams of dancing alongside the Northern Lights! Having long heard of many friends raved about the extraordinary beauty and uniqueness of the landscape in Iceland, my husband and I were full of anticipation for the trip. However, we soon realized that one week was probably too short a duration to cover all that we want to see in Iceland! Furthermore, as it was during the winter season, with the unpredictability of the Icelandic weather and unfamiliarity of driving in snow and ice, we decided to join a local tour group! The only downside of this decision was that we were only left with 2 days to explore Reykjavik and to go for the Northern Lights hunt! :(

We touched down in Iceland in the afternoon but as daytime is short during the winter, it was dark by the time we reached Reykjavik and we were quite disappointed that we did not get to see much on this first day. Our disappointment was made worse when we got news that the Northern Lights hunt for the night had to be cancelled due to poor weather conditions.

In a bid to shake off all that negativity, we headed back to our apartment after a brief walk in the city center to cook our dinner. Looking at the prices of the restaurant food and even that of the fresh food in the supermarket, we were glad that we had the option of cooking our own meals by picking an accommodation with a kitchen as well as packing several staples and ingredients in our luggage! After dinner, we then headed to bed, vowing to wake up earlier the next day so that we can have more time to accomplish the things that we had set out to do and see!

Waking up earlier than usual the next day proved to be quite a challenge, especially on a cold winter day! With the sky still dark, the inertia to get out of the warm and comfortable bed into the cold and windy streets was one of the strongest to date! However, as we do not have the luxury of time, we eventually dragged our lethargic bodies out of the apartment.........and headed straight to a nice and cosy cafe for breakfast!


After a nice and hearty breakfast and with the sun slowly rising up from the horizon, my husband and I proceeded to explore the city. Reykjavik, the capital of Iceland, had a rather modern and sophisticated outlook. As we walked around, we were constantly amazed by the uniqueness of its architectures. The exterior of the Hallgrimskirkja church looks impressive with its towering height and resemblance to the basalt rock columns and the huge pipe organ located in its interior was certainly mesmerizing!


Along the harbor, the Harpa Concert Hall, whose geometric shaped glass panels bore some resemblance to the basalt columns, was one eye-catching architectural structure! Located a short distance away lies the Sun Voyager sculpture, a boat-like structure which was set against the beautiful backdrop of Mount Esjan. It would have been nice to stand there and admire the view if not for the sudden downpour of rain that left us quite drenched!


Time seemed to have sped by as we walked along the picturesque streets of the city, admiring its awe-inspiring buildings and just soaking in the crisp and cooling winter air. Before we know it, it was time for lunch and we went straight for this particular restaurant that caught our eyes (and stomach) with its signature fish soup and fish of the day dish. The fish soup was creamy and filled with seafood flavor with a tinge of sourness from the tomatoes and vinegar - a very refreshing and unique taste. It also contained a generous amount of sliced fish. We also ordered the grilled fish of the day and it was delicious. The outer layer of the fish was grilled to perfection with the inner portion still retaining its moist, fresh and tender mouth feel! My husband and I could literally feel the ocean surrounding us as we indulged in this “fishy” Icelandic cuisine!


We were glad to have filled up our tummies and obtained adequate rest time for our legs during this lunch break before we went for our city tour. Our guide was a local, handsome and young chap who had a great sense of humour, making it a joy to follow him as he shared with us the unique history and folktales of Reykjavik. The most interesting thing that he mentioned was that majority of the locals believed in the existence of elves. They also believed that the various huge rocks or stones lying around were the home of the elves - moving them could only be done after seeking the approval of the elves, otherwise bad things will happen to those who touched their homes! Not only did he also gave a good history of the various significant landmarks in Reykjavik, he also tried to teach us some common Icelandic phrase (which I found it extremely difficult to pronounce!). It was an afternoon well spent which left us with a deeper understanding of the history and culture of Reykjavik! :)

With no news from the tour group that we signed up for and this day being the only day left available for us to go for the Northern Lights hunt, we were about to lose all hopes of ever seeing the lights when we received an email stating that the Northern Lights activity was at its peak and that the hunt will proceed later tonight! Hurriedly, we rushed back to our apartment for a quick dinner and started to prepare for the exciting hunt later on!

At the designated time of 9pm, we were already waiting in front of our apartment for our ride to catch the Northern Lights. It was quite easy to tell when was a good day to try and catch the lights as we could literally see many others (just like us), standing in front of their accommodation, waiting patiently for their ride for the night! Several vans came and went before ours arrived and we boarded the van excitedly and were welcomed with the excited chattering of those who were already in the van.

Our driver-cum-guide was an experienced photographer who had been organizing tours like the Northern Lights hunt and tours around Iceland for many years. Equipped with a walkie talkie, our guide was constantly communicating with the other guides to locate the best spot to watch the Northern Lights. After leaving the city, we drove for quite a while in the darkness before we managed to locate a particular spot. There, we saw a faint streak of green lights floating in the sky and everyone got off the van to admire it. Our guide started setting up his camera and proceeded to help each and every one of us to take photo with the lights!

As the lights started to fade away, our guide decided to try and find another spot. It was another long drive in the dark (which I had absolutely no idea how our guide was able to navigate in the dark so confidently) before we came to our next location. It was completely dark when we got off the van and looked up in the sky when suddenly bang! - a bright wave of green lights started dancing above our heads. The view was phenomenal, nothing like I had ever seen before! The initial dark sky was suddenly lighted and filled with energy and life! It was as if the lights were doing a joyous dance to welcome all of us to Iceland! All of us cheered and clapped when we saw this awesome display of lights and we just stood in silence with eyes fixated on the lights for the whole duration that it was there. It was only when the lights vanished as suddenly as it had appeared that we slowly proceeded to board the van. Northern Lights - another item ticked off our bucket list! It was certainly a night to remember for all of us and I was glad that I was able to witness this phenomenal view alongside my husband!

Physically tired but mentally very much alert and heart pumping hard from all the adrenaline rush earlier on, we finally reached our apartment and it was time to call it a day. We were really fortunate to be able to see the Northern Lights with our very own eyes and we really could not wait to embark on the Golden Circle tour around Iceland scheduled for the next few days. Stay tuned~

Yours Truly,
Claire
Posted by Unknown at 09:55