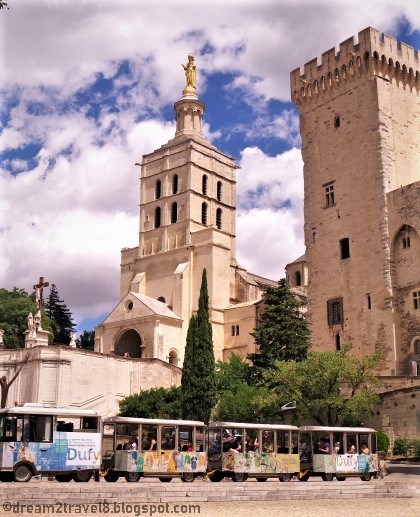 It was the time of the year when the lavender fields in Provence started to spring to life, blooming with rows and rows of the eye-catching purple floral and filling the air with the delightful and mesmerizing lavender scent! The lavender season in Provence usually starts from end June till early August when the lavender flowers are harvested. Having had some spare time in hand during the lavender season, my husband and I decided to make a weekend trip to Avignon! We had allocated a day to explore Avignon city and the following day for our guided tour with a local tour company to visit the lavender farms (including a stop at the famous Senanque Abbey) as well as to the villages of Gordes and Roussillon.

As mentioned in the previous post, my husband and I are not big fans of driving (though it does allow for more flexibility and convenience when travelling) and hence we decided to make Avignon our base since it was easily accessible via train. Our hotel was located within the city center, which made it possible for us to explore this quaint little town on foot! After putting down our luggage in the hotel, we proceeded on to explore the town and we were greeted with the bright and cheery summer sun - certainly marking a good start to our trip! Our initial impression of Avignon was that it was a quiet and nice place with many scenic spots!

Our first stop of the day was to Rocher des Doms, a public park that is situation on top of a hill. It was a pleasant walk, with the cool morning breeze brushing against our skin, our ears filled with the bright chirping of the birds and our nostrils filled with the wonderful smell of Nature! When we reached the top, we were gifted with the beautiful view across the Rhône river where the Saint-Bénézet bridge could be seen in the foreground and Fort Saint-André in the background! Looking upwards, the sky was in a beautiful shade of baby blue, with many cotton-candy-like clouds floating in the air! It was just an amazing feeling standing at the top of the hill admiring this gorgeous naturally crafted landscape painting!

As we descended from the hill, we arrived at the Avignon Cathedral. The golden Virgin Mary statue located at the top of the cathedral against the backdrop of a clear blue sky was definitely eye-catching. At the entrance of the cathedral, there was another platform with a centralised sculpture of Jesus on the cross, surrounded by sculptures of His followers and angels. These sculptures and statue certainly added another layer of charm to the cathedral! From the platform, apart from being able to admire the sculptures, we were also able to have a closer look at the exterior of Palais des Papes situated on the left of the cathedral as well as a bird eye’s view of the plaza square located at the foot of the cathedral. It was as if I had the best viewing position in the theatre, with all the actions and on-goings happening at the plaza square streaming live in front of my eyes! I could literally just stand there the whole day, doing nothing but people-watch! 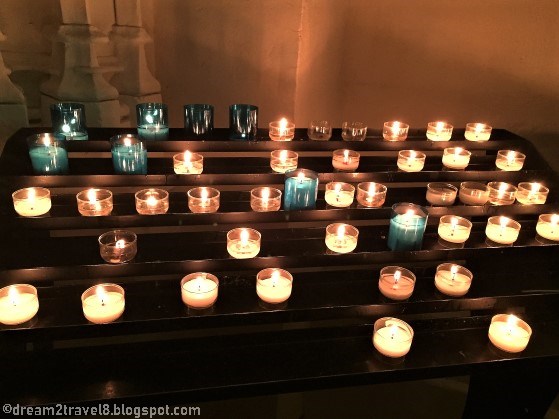 Palais des Papes (or Palace of the Popes) was huge, had a very majestic exterior appearance and is of great significance to Avignon. In 1305, Pope Clement V fled Rome because of the chaos that took place after his election and moved the Papal Curia to Avignon. Then, the construction of Palais des Papes started off on the foundation of an old bishop palace and Avignon became the home of 9 successive Popes in the 14th century, with each Pope leaving his mark on the building. When the Popes returned to Rome in 1377, the building remained in the hands of the antipapal forces for a few years before it was returned to the authority of the papal legates in 1433. While under the papal control, the building started to deteriorated and it was further damaged by military occupation and subsequently vacated only in 1906, when it became a national museum. Today, the palace consisted of two main sites being joined together - the old palace of Benedict XII and the new palace of Clement VI, and which together they formed the largest Gothic building of the Middle Ages. This palace, rich in its historical significance and which stood as a mighty symbol of the church’s influence on the western Christian world in the 14th century, has now been listed as an UNESCO World Heritage site.

At the start of our visit to Palais des Papes, we had watched a short video clip depicting the above mentioned history of the palace and were immediately intrigued by all the sequence of events and we could not wait to explore the palace. However, when we entered the palace proper, we were kind of disappointed as there were (a) little or no information to guide us on the different areas of the buildings (which would definitely be helpful to provide some sense of direction in this huge piece of land), (b) the interior of the palace being wiped clean of its original content and filled instead with the presence of art displays or sculptures in several areas of the palace and finally (c) the erecting of scaffolding and a stage in preparation for the Avignon theater festival within the palace (which contributed even more to the confusion of lost sheep like us wandering about and trying to find an alternative pathway around the scaffolding). However, despite all of that, the gorgeous panoramic view of the city as well as the close-up look at the Virgin Mary statue of Avignon Cathedral at the terrace of the palace soon made us forget about all the disappointments! :) 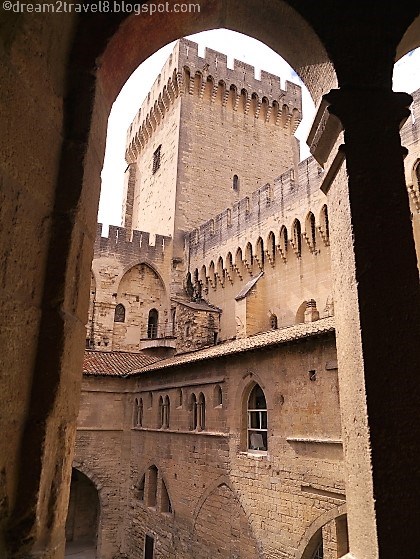 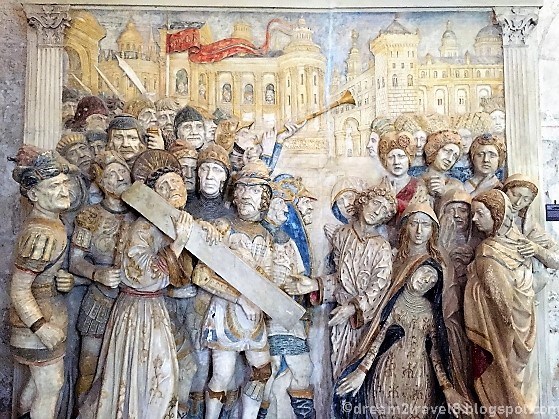 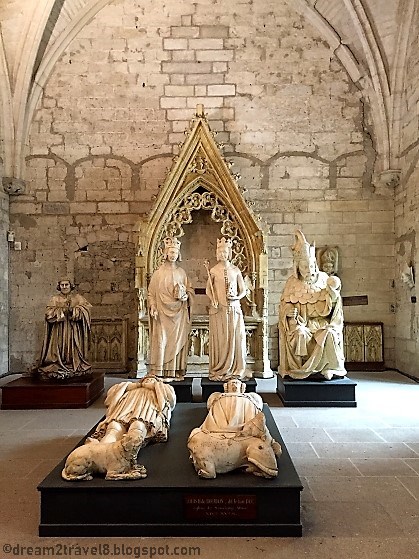 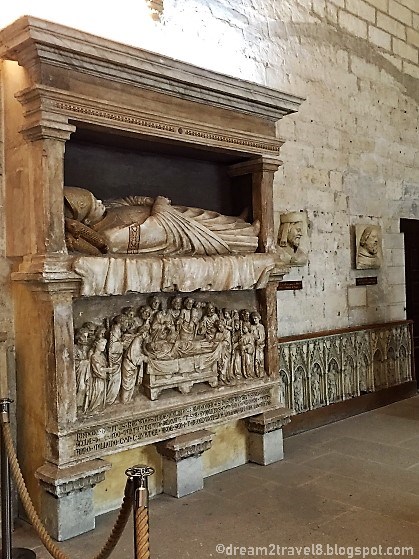 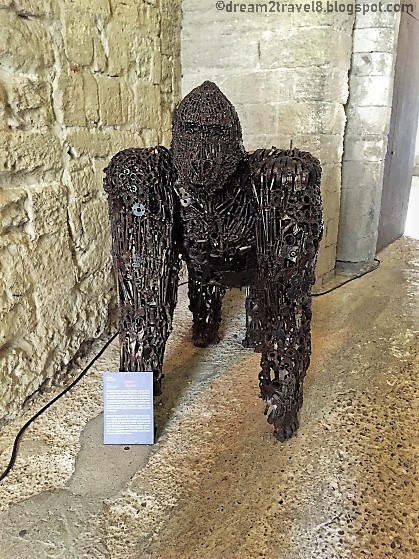 Having explored the main attractions of Avignon city, we spent the rest of the day wandering about the small alleys of the city center, having a peek at the beautiful and lively restaurant-filled square at Place de l’Horloge, crossing Édouard Daladier bridge and having a nice and quiet stroll along Rhône river before heading back to the hotel for a good night rest! It was a pleasant first day of our trip and we really had fun exploring the grounds of Avignon city. We certainly do look forward to the lavender field tour that is to come.... 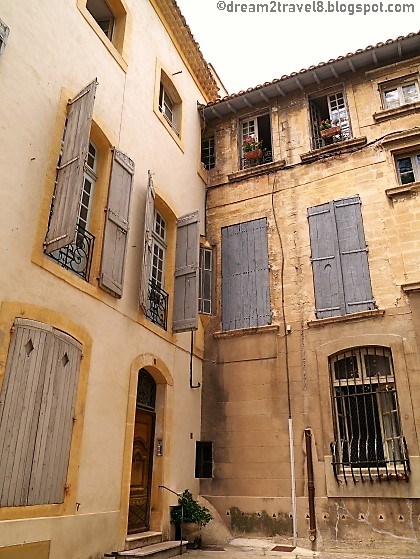 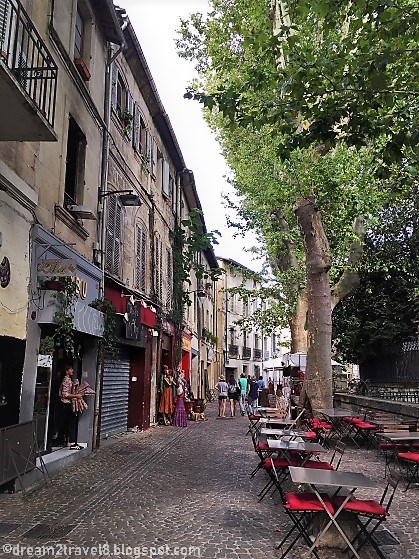 Yours Truly,
Claire
Posted by Unknown at 08:25