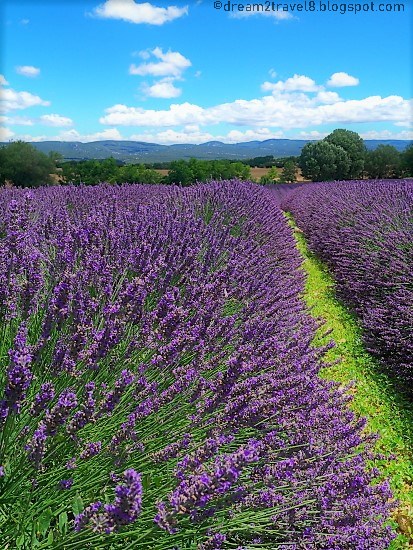 It was with excited hearts that my husband and I embarked on our guided tour to visit the various lavender fields near Avignon. At the appointed meeting time, our friendly lady guide met us at the doorsteps of our hotel and brought us to this little van where the rest of our tour mates were gathered in. We were a small group of eight, with travelers from America, England, France and other parts of Europe. My husband and I were the last to board the van, and once all of us were settled in, our guide started to brief us on the itinerary for the day as we zoomed along the expressway towards our exciting journey for this day!

It was a pleasant drive and all of us were immersed in the beautiful and scenic views along the way on this bright and sunny day. Time seemed to have come to a standstill and before we know it, we had reached our first destination - a photo point against a gorgeous backdrop of the town Gordes. There were many tour buses and private cars lined up against the road near this photo point and everyone was trying to get a nice photo with the mesmerizing old village that is perched on the southern edge of the high Plateau de Vaucluse. With it white and grey-stoned houses spiraling around the rock where the village is set, it is no wonder that Gordes has been listed as “one of the most beautiful villages of France”!

Looking out towards this magnificent view while standing at the edge of the photo point, all the hustle and bustle of this very crowded spot seemed to drift away and I was just in awe by all that my eyes could take in. It was a humbling scene and one that drew out all my artistic inspiration - I would have taken out my drawing equipment to sketch out this scene if not for the fact that we were on a guided tour and had only a limited amount of time to spend at this spot!

After spending a good duration of time taking in the gorgeous landscape of Gordes and with tons of photos taken, we continued on our journey. Along the way, our guide was explaining to us that the harvest of the lavender flowers do not all occur at the same time as the flowers will bloom at different rates in different lavender regions. She continued to emphasize that hence, it was important to plan the route well so that we do not end up in a bare field where the lavender flowers had all been harvested. Our guide was very familiar with the locations of the lavender fields and had made it seemed so easy to be able to drive up to a random field blooming with lavender flowers! All thanks to our guide, we managed to make several pit stops whereby we had the whole lavender field to ourselves! It was just amazing! I was actually standing on a lavender field, breathing in the air filled with lavender scent and seeing with my own eyes the rows and rows of purple floral against the backdrop of a clear blue sky - something that I had only seen on postcards! At one of the lavender field, our guide even picked out some samples of the floral and explained that there were two variations of the flowers - lavender flower and lavadin flower. Lavadin is a hybrid flower and is larger, has longer and more pointed flower spikes as compared to lavender. Regardless of the breed of flowers that we were looking at, my husband and I were just very thankful to be able to immerse ourselves in this purple wonderland!

It was a fun-filled morning hopping from one lavender field to another and the most memorable one was perhaps the stop made at the famous Senanque Abbey. The Abbey, located near the village Gordes, was built in the 12th century for Cistercian monks who came from the Ardèche region of France. And boy, this place was so crowded! We arrived at the abbey in the late morning and by this time, the abbey was already filled with people. The main road leading to it was jam packed with tourist buses and private vehicles. It was so bad that our guide had to drop us off first before she went in search of a parking space. As we walked closer to the Abbey, we soon realised the reason for which many were drawn to it. Situated in a small valley surrounded by hills, the heather-gray stone abbey with its rows and rows of the purple lavender flowers certainly emit a strong sense of tranquillity! It was a pity that we were only given enough time to take a walk around the Abbey before we had to continue on with our tour. It would have been nice to be able to explore the interior of the Abbey, another time perhaps!

After exploring the lavender fields, our guide drove us to the village Roussillon, which happened to be our last destination for the day. There, we were finally given some free time to explore the village on our own as well as to shop for some lavender products to bring back home! Roussillon, situated on the land of one of the biggest ochre deposits in the world, is famed for its distinctive red cliffs and its wide palette of beautiful natural color pigments. The streets of the village were lined with houses donned with the various ochre shades varying from light yellow to dark red and coupled with brightly colored shutters and doors, creating a very playful and lively outlook to the village!


My husband and I had great fun just walking through the windy streets of Roussillon, armed with a lavender ice-cream cone in our hands to combat the hot weather, and taking time to admire the architectures of this charming village! Prior to this trip, we had heard of the “Ochre trail”, which is a path through the marked out ochre land that winds through the earth pillars and hills carved out by water, wind and by the hands of man. It was certainly a pity that we did not have enough time to go for the Ochre trail as it would have been so interesting to really explore this Orchre land in greater details! Well, I guess that had just given us all the more reason to make another trip to Roussillon in future! :)

Time seemed to pass very fast on this day and before we know it, we had come to the end of our tour. We had a very fulfilling and fun time exploring the lavender fields and the various scenic spots along the way, all thanks to our wonderful and informative guide who was armed with a well-planned itinerary and route! This trip had also stirred up our interest in doing a self-drive tour of our own! Well, who knows, we might just have one of such tours very soon!! Till then, let me continue to reminisce on all the fun that we had at the lavender fields......